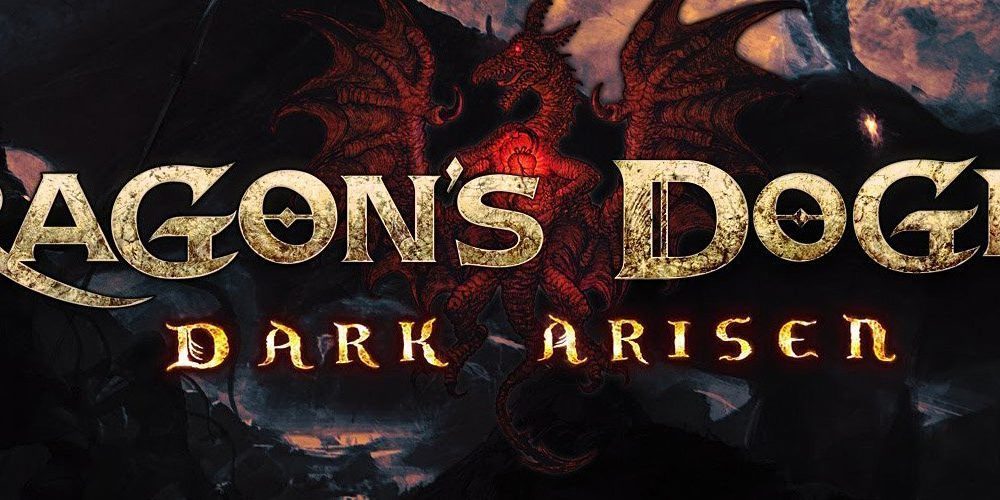 Another Japanese fantasy RPG about eternity and cycles. Except this one is a ton of fun. You look like a potato in cutscenes, though. And Christ knows who your beloved is.

I’ve known this game existed for years, probably since the ZP review, which is probably one of the reasons why I didn’t try it until late last year. A lot of the talk has been about the pawn system, in which you create a secondary character, outfit them with gear and knowledge and then allow other players to “hire” them for their adventures. To me, this seems entirely unappealing.

Also, what is up with the name? I know it’s a dumb reason, but “Dragon’s Dogma” does not evoke interest in me. It’s also arguably inaccurate given the game’s subject matter. Nevertheless, I eventually gave it a go once Dragon’s Dogma: Dark Arisen was out, and I’m very happy I did. I will remember this game.

Thankfully, the very first screen of the game gave me an option to turn off all online content. Hireable pawns were computer-generated. But, since I am insane person, I also took the game up on its offer of not hiring any pawns at all, sticking with only my primary pawn throughout the entire game. Hard mode from the start, too, of course. I ain’t getting softer with age.

It took a little while to figure what kind of combat system the game employed. I think it’s one of those “easy to learn, hard to master” ones, with more complexity than would initially appear to be. It lies somewhere halfway between Souls-like and hack’n’slash. You have basic melee, ranged and magic attacks, most of which are well-designed and satisfying. In addition, you can climb up on larger enemies and stab them in the face or what have you. 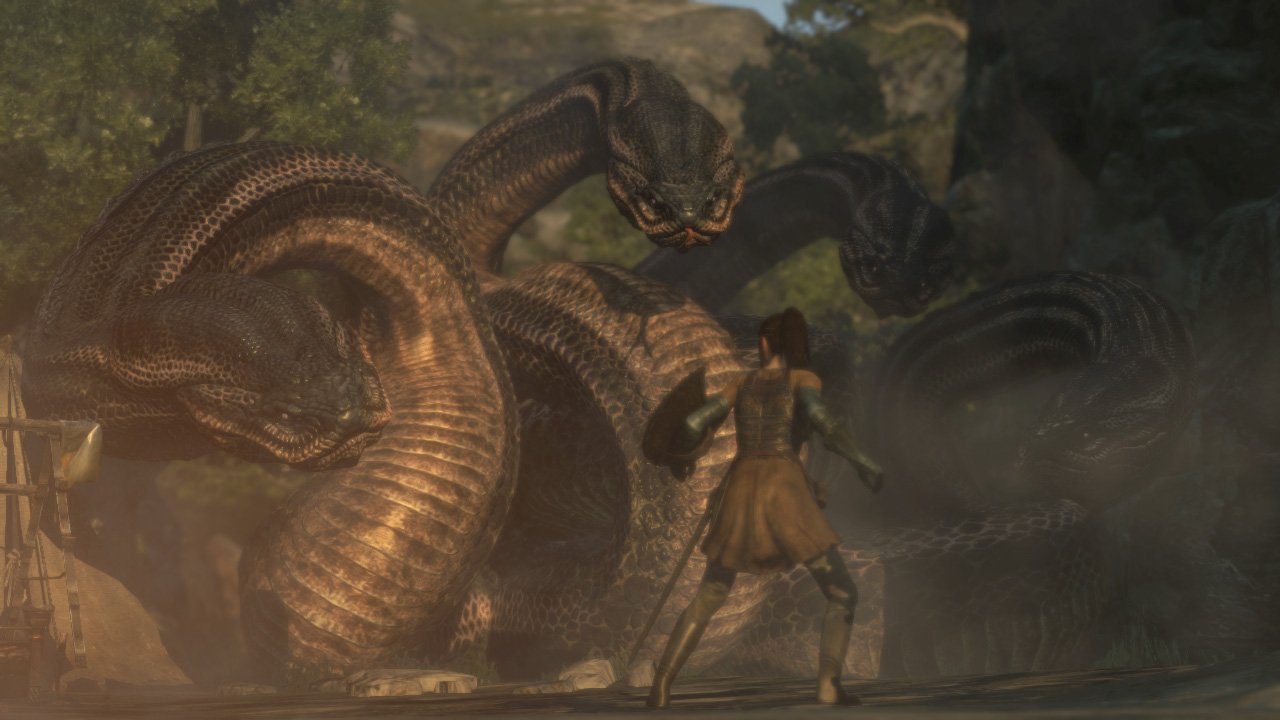 Elements, status effects (called debilitations) and staggering are all there, too, although you don’t necessarily need to pay attention to them. I levelled almost entirely as an Assassin for the strength bonus. Sword and bow. The daggers had a fantastic counter but they felt sticky to use. I also found a perfect mix of abilities for the sword; Dire Gouge, Full Moon Slash and Clairvoyance. The beauty of this one was that Dire Gouge only works when climbing an opponent. At other times, attempting to use it yields the basic attack, which means you can hold down the melee skill button all the time, allowing for easier access to Clairvoyance.

The good, the bad and the awkward

Overall, the combat system is excellent. It’s fun and satisfying. It’s one of those games in which I found myself sometimes attacking opponents for no reason other than the joy of fighting them. Without the promise of a challenge or quest goal, I rarely do such a thing.

It does have flaws. The QTEs do not translate well from the console. Tapping A and D consecutively to escape from enemy holds isn’t grand. And I have to hand out an outstanding BS award to the Eliminator’s hold attack. Unless you have a bionic arm, it’s impossible to escape before that hammer slams down on you, and it’s an instant kill even at full HP. Maybe a more defensive character can take the blow but my level 200 Assassin still bit the dust every time, even when she had some Bitterblack Isle gear on her.

Whilst the climbing aspect of the combat is a great addition, it’s also busted as hell. The camera will often not care enough to show you, instead seeing fit to display the monster’s back or some scintillating ground texture. And unless you’re trying to climb straight up something’s back, it’s anyone’s guess which direction your character will go when you press a button. There was no point in trying to climb dragons half the time because the camera wouldn’t show me where I was and I had no idea which direction I was climbing. 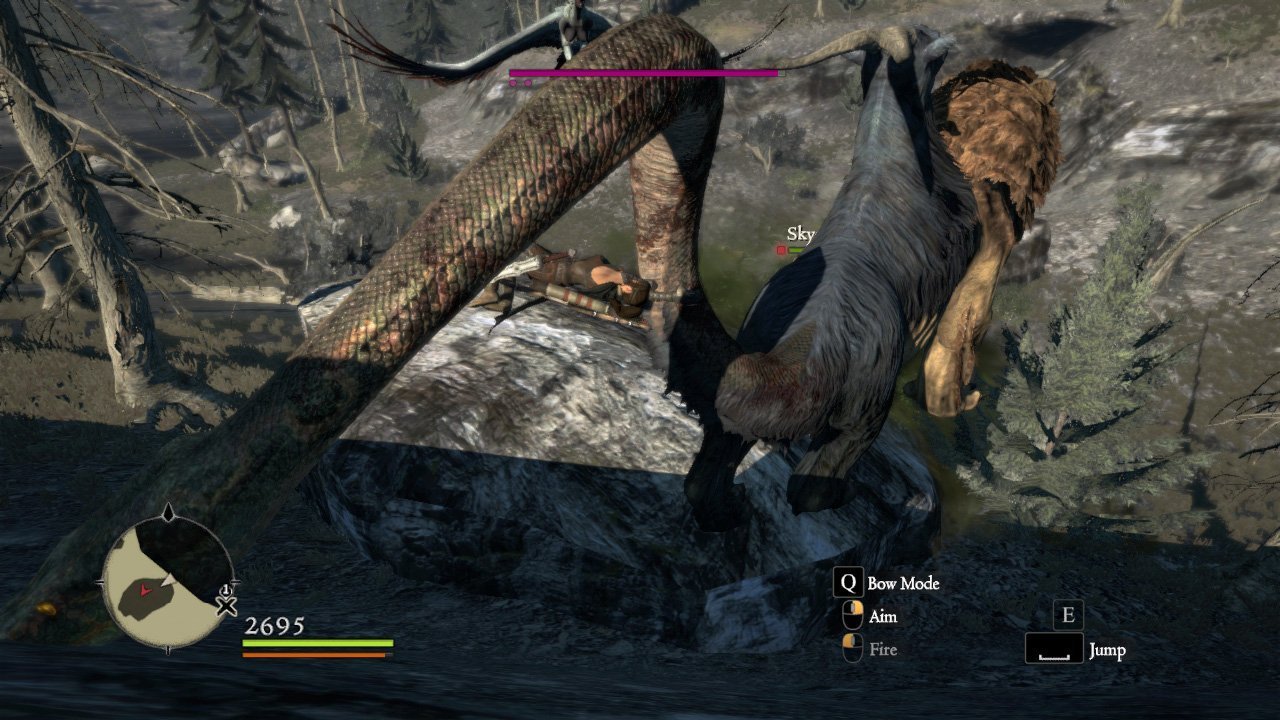 Hold on tight. Your pawn is throwing skulls at harpies.

Now, graphics aren’t that important to me, as I usually turn them down to maintain a solid 60FPS and my PC isn’t built for gaming. The first cutscene in the game shows some really gnarly facial animations and it doesn’t get better from there. Your character will rarely look sensible. More often than not, they’ll appear to be someone who’s only ever read about facial expressions in surgical manuals.

The world, Gransys, apart from being the username of an eighty-year-old sysadmin, is purportedly massive. I do not see how anyone could make this suggestion. For an open-world game, Gransys is absolutely tiny. The equally purportedly massive dungeon Bitterblack Isle is also tiny. I very quickly exhausted what little exploration the world offers, and most of it looks the same. This is one of the few significant disappointments of the game.

Monster design is a different matter. Dragon’s Dogma is not unlike an old-school MMORPG, in that you can accidentally stumble on giant monsters that will pound your level 20 arse into the ground. Cyclopes, chimaeras, drakes, wyverns, cockatrices and more are aplenty. But even here it seems like they could’ve done more. Another year and some more money, this game’s world and monsters could’ve been absolutely stellar.

They did fix this a little in the expansion, Dark Arisen, in which you get to fight Death himself (as in the grim reaper, although previously an Arisen, too) and the so-called Condemned Cyclops, which is an enormous version of the gorecyclops. It starts out chained to the walls. The first time I saw that thing, I went outside and bought more curatives. 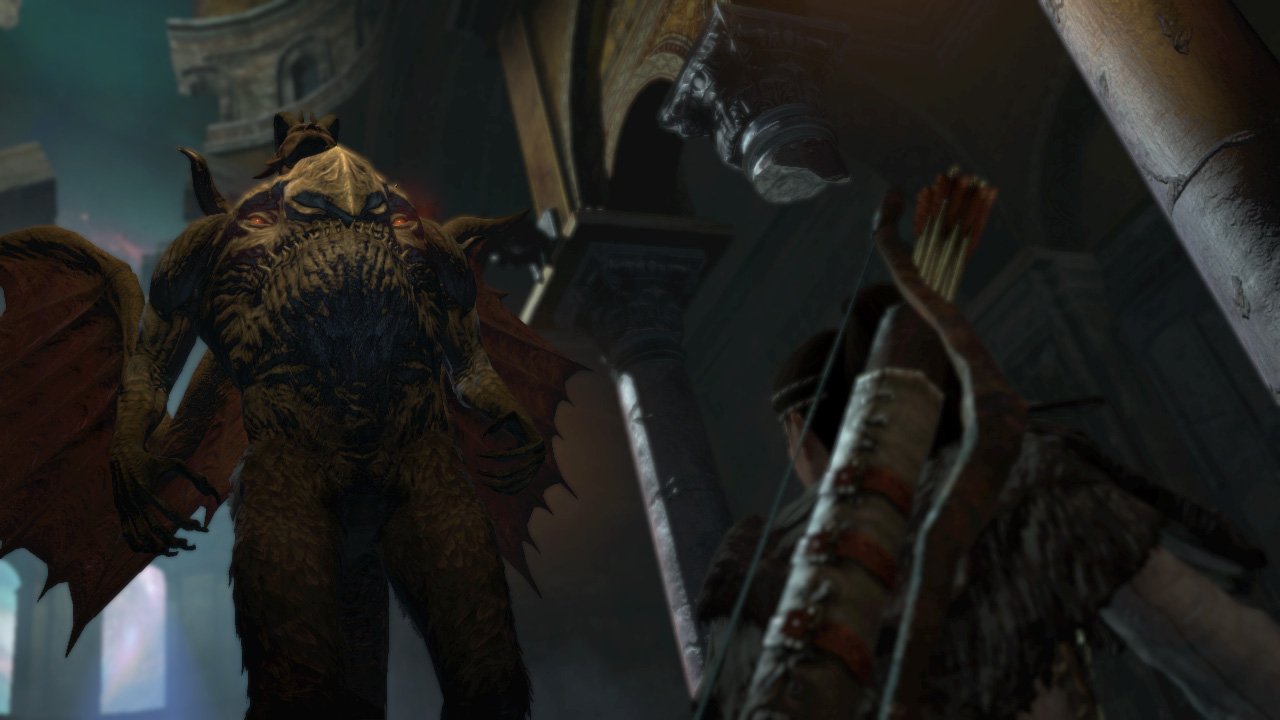 The final boss of Bitterblack Isle.

As a final note on Bitterblack Isle, the screen effect and sounds which accompany the corpse-eaters are terrifying. I’m more vulnerable to jumpscares than the average person, I’d wager, but this one made it hard to play alone in the dark. They come out of nowhere and before you’ve levelled a good hundred times, the elder ogre will munch you to bits.

What if God was not only real but as anthropomorphic as it’s often suggested? How many years could a person spend in this life before life itself becomes a challenge? Novelty is fleeting, and a divine being wouldn’t even face the obstacle of challenge. Being able to do anything, however you like, without any opposition. Ironically, it would probably be not unlike playing Dragon’s Dogma after you’ve reached the max level and acquired the best potential gear.

Nevertheless, the game posits the notion that a divine being would require will above else and that even those of the strongest volition would eventually falter and demand that dreamless sleep. In Dragon’s Dogma, these strong-willed people are known as the Arisen. Except they are not prophesied, nor divine, nor are they really special at all. They are human beings with unusually strong will. 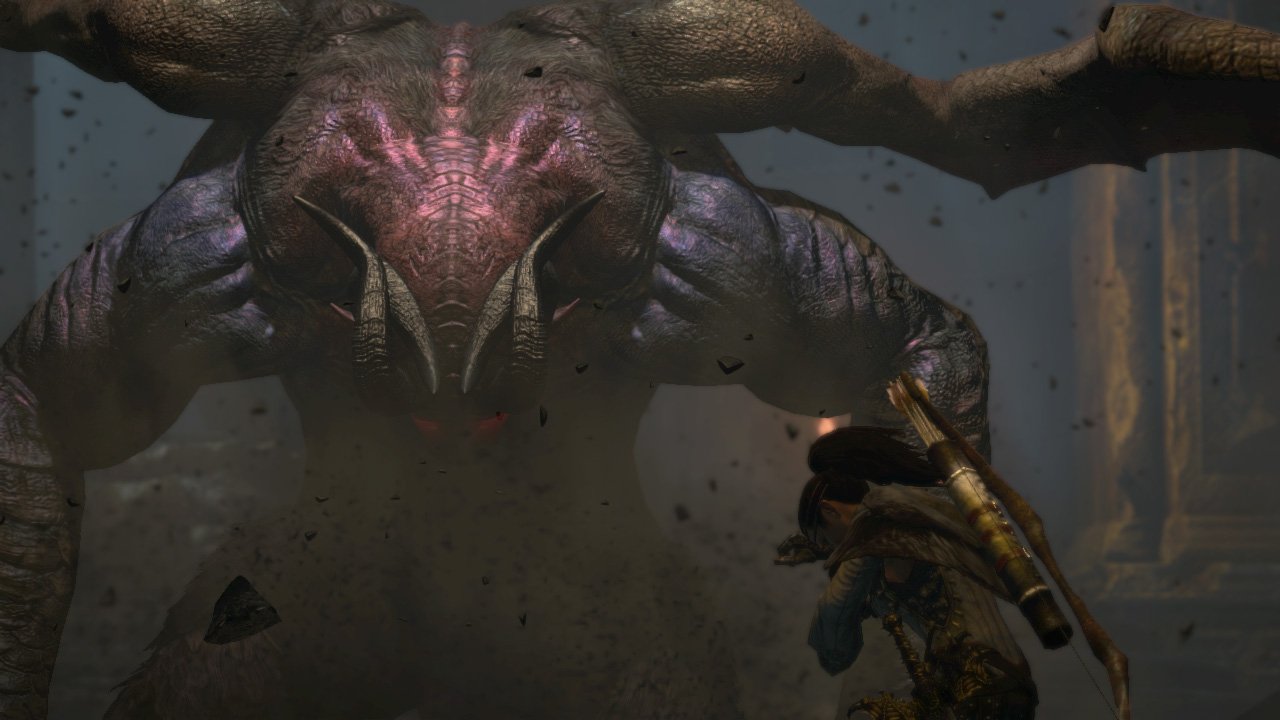 This shit will not beat me.

In a way, that’s clever game design, because will is the only thing the player demonstrates above all else by continuing. There’s nothing preventing you from stopping, whether from boredom or insurmountable challenge. When you win, it’s your own doing.

Our character is a fisherman at a village on the seaside. When the dragon (who is prophesied to return over and over) attacks said village, you are the only one who doesn’t run. Even the duke’s guards run for the hills. There’s panic. People die. But you don’t. You, a fisherman, without any combat skills to speak of, take up a sword and run for the shore to fight the dragon, the giant, red, fire-spewing monster with claws the size of farm equipment.

Unsurprisingly, your attacks do little, but you do manage to pierce one of its hands with the sword. The dragon’s eyes lit up, although not with anger. It proceeds to take your heart from you, and challenge you to retrieve it. Now, what kind of will does it take to go on such a journey? 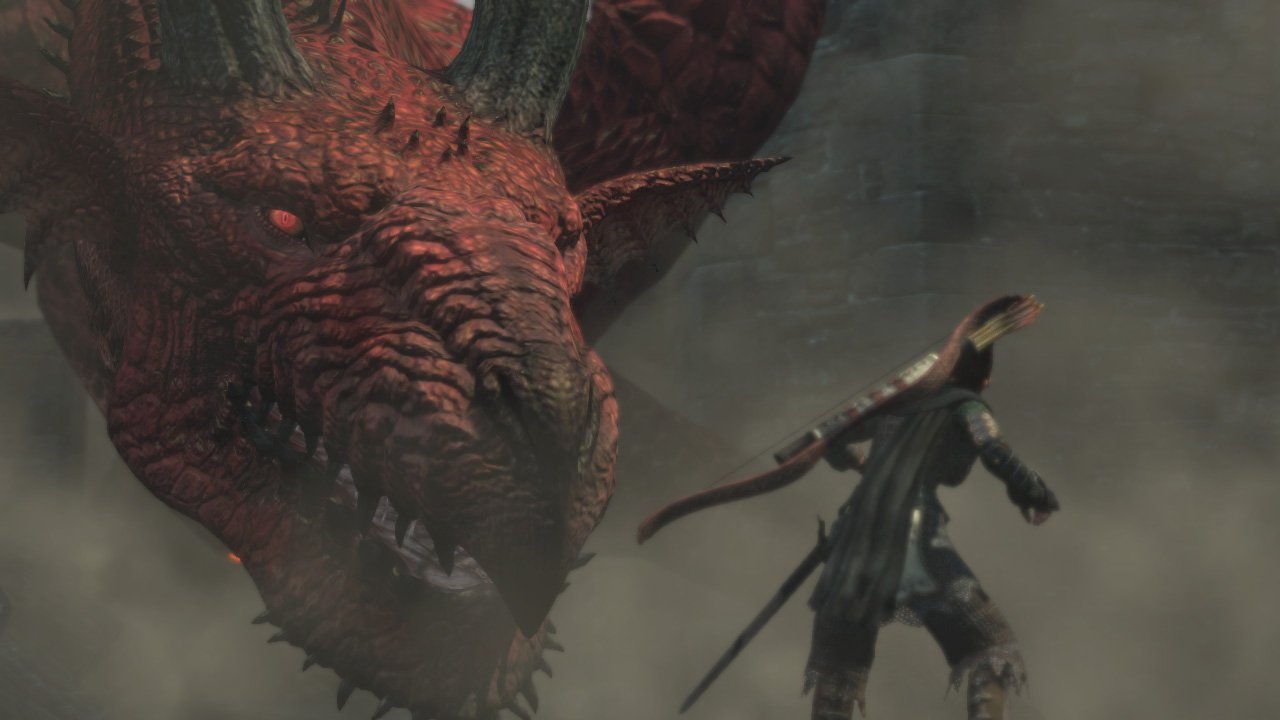 If you would face me, take up arms, newly Arisen.

At the end, it turns out the dragon’s purpose is to find the next potential Arisen and posit said challenge. Once you’ve travelled the world and built up your strength sufficiently and you finally face Grigori (the dragon’s name) in combat, he has one last trick up his sleeve. Sacrifice your beloved and you don’t have to fight him. He will leave, for a time. Here, many Arisen falter. But you, of course, you tell the dragon where he can stick his deal.

Except defeating Grigori doesn’t improve anything. He dies, sure, but with his dying breath, he summons a giant chasm right in Gran Soren — the capital of the land, Gransys — which takes half the city with it, spilling out hellish monsters that roam the land afterwards. The duke will accuse you of conspiring with the dragon to accomplish this. So, in short, besting Grigori only made things worse for everyone. 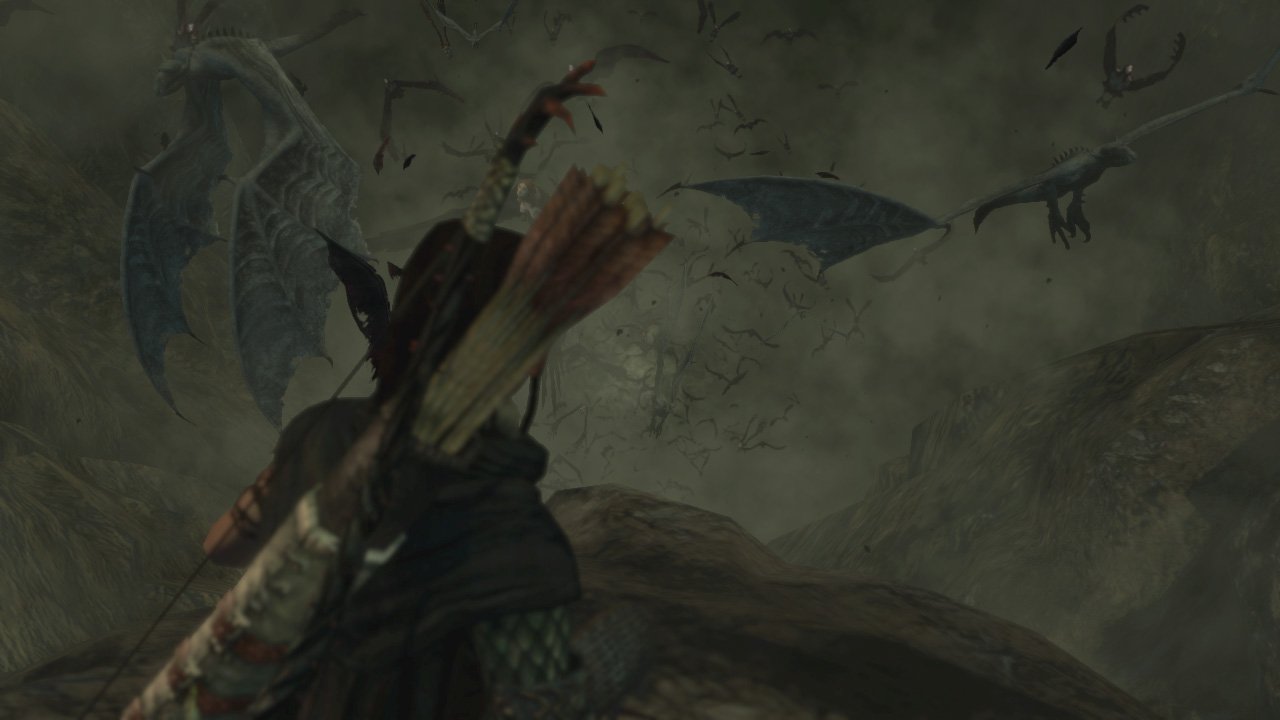 Is this the world you wanted to save?

But there’s a final test. Leap into the chasm, the Everfall, and locate one of the oldest pawns. She will tell you of a way to summon a portal to somewhere quite special, where you can find out the truth about everything. You meet the previous Arisen who bested the dragon instead of taking his bargain. He, now the Seneschal — essentially God — tells you of the trials each Arisen are destined to face, in an eternal circle.

Show him one final test of will and take his place. Become God, for his own forge of will has faded, as was the reason for sending the dragon out into the world once more, to find and test God’s replacement.

We called it Sin

To end the game in earnest, you must use the Godsbane sword to take your own life, ending the eternal cycle, as there can be no Seneschal to find the next in line. What happens afterwards? In true Japanese fashion, they don’t see fit to tell us.

But while you die, you are able to grant one final gift to the pawn which stood beside you the whole way. For me, it was the warrior-turned-sorceress Skye. As the both of us fell from heaven, what spirit remained in my character was bestowed unto Skye, and she woke up in “my” body. Before the credits roll, she nods at the camera as if to say goodbye. That little moment came out of nowhere and left me rather stricken.

(Yes, that is every last bit as soppy as it sounds, but I can’t help it. I love this dramatic stuff. What do you want from me?) 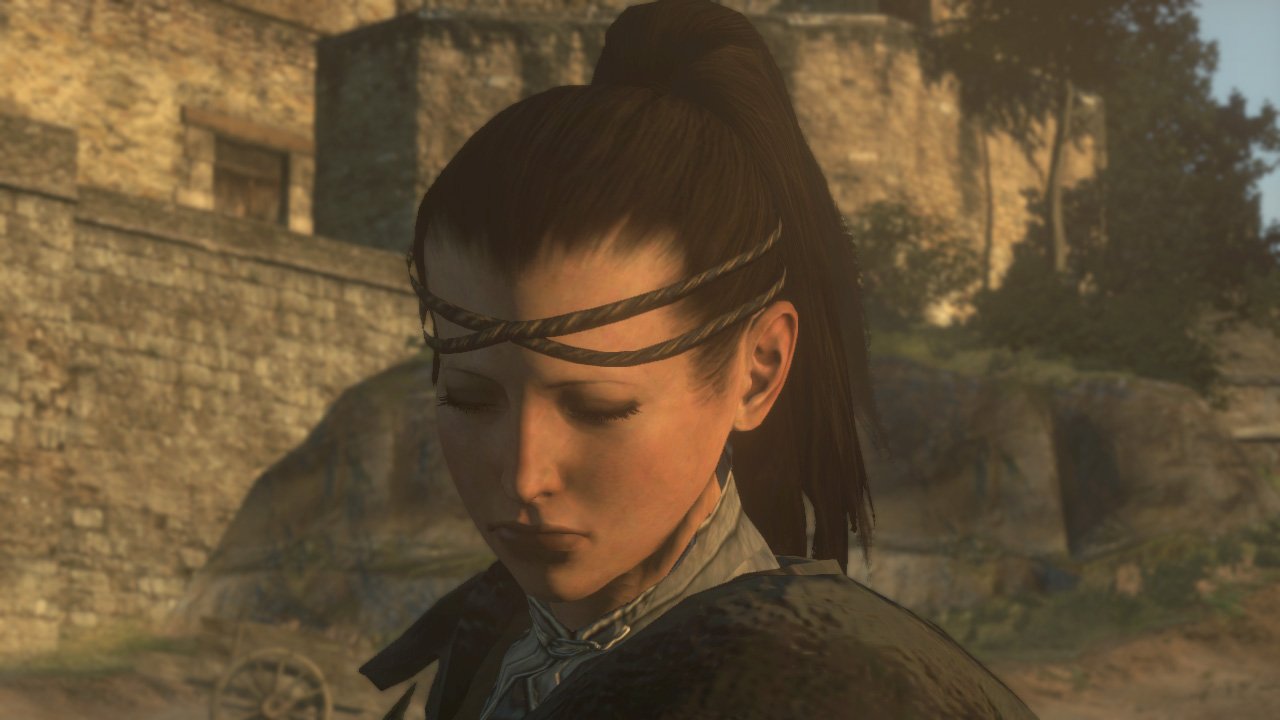 One foot after the next, come what may. That is what it means to live.

Perhaps my enjoyment of the story has more to do with me than any inherent quality of the game, but I still find it impressive that they managed to pack so much emotion and immersion into a main character that never speaks, nor does anything in cutscenes except make awkwardly modelled facial expression.

I had a hard time letting go of Dragon’s Dogma. I played it twice, and the second time dragged on for longer than it should have. All of the story, feels and philosophy aside, it’s a game that’s just damn good fun to play. I’m happy it exists.

On Fallout 4; the death of a world and the Michael Bay of video games
Streams of consciousness, part 3