The realities of dragon slaying

Now that Skyrim has been out for a notch or two, I figured it was time I tried my hand at it. Here follows a product of my insanity when coupled with a few hours killing dragons in Skyrim.

I should mention that I’ve been playing the game on the Master difficulty setting right from the start, as a character close to the Witchhunter from previous TES instalments. While it’s mostly intended to be stupid and funny, the events described actually took place (mostly).

As much as I would’ve liked just booting up the game right in front of a dragon, that isn’t what happened. I’d saved after killing some mudcrabs in a place called Mara’s Pond, knowing that there was a trap door on a small patch of land in the middle that needed clearing. Inside, I found two vampires with no understanding of how badly cloth protects against a blade. The one pet they called forth died during its summoning animation and I proceeded to toss both of them into the hot spring they could’ve hidden in when they heard me coming down. 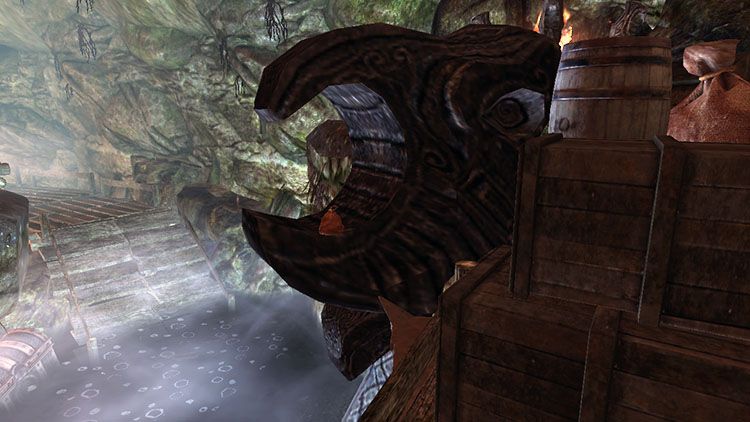 You just know some douche put that there.

After grabbing the coin purse by leaping over the railing Sinbad-style, I looted a few swords, a shield and some gems and put them all in my pack (because I am monstrously strong and can carry entire villages on my person), after which I left the dungeon and went to search for the dragons that I was after.

Lo and behold, after strolling around for a while, I found something. Unfortunately, it was not a dragon, just Eeyore from Winnie the Pooh. 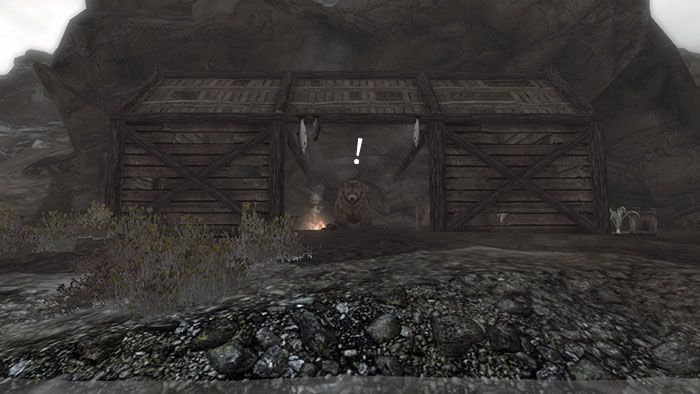 Yeah, this is my crib, what of it?

He’d scored himself a new house with a nice view of the river. For a while, he just stood there taunting me, seemingly not caring enough to maul me until he was certain that yes, I was there to take his house from him. He could tell I’d always wanted an empty port warehouse-looking kind of place to go with my propensity for swimming in a full suit of armour and carrying around an armoury of equipment in my back pocket. 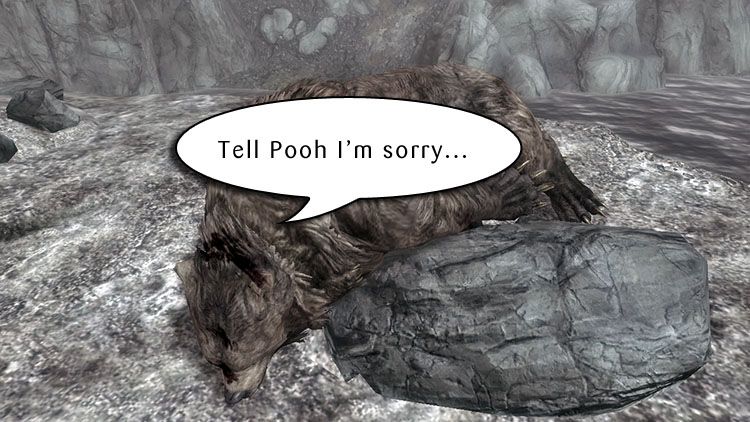 I suddenly remembered that Pooh is the bear.

In a display of fantastic stamina, the thing ran out from the house and charged at me. I hid behind a small rock that by rights could be jumped even by a lopsided mudcrab but the bear hit his nose on the end of it, slowed down, re-angled himself, and by the time he was ready to charge again I’d already carved out a very ugly portrait of Fester from The Addam’s Family from his face. He died with an apology to Pooh, seemingly for devouring and assuming his shape.

I went back into the house to see if I could steal the previous owner’s stuff and to my great surprise (and disappointment) I found the owner. 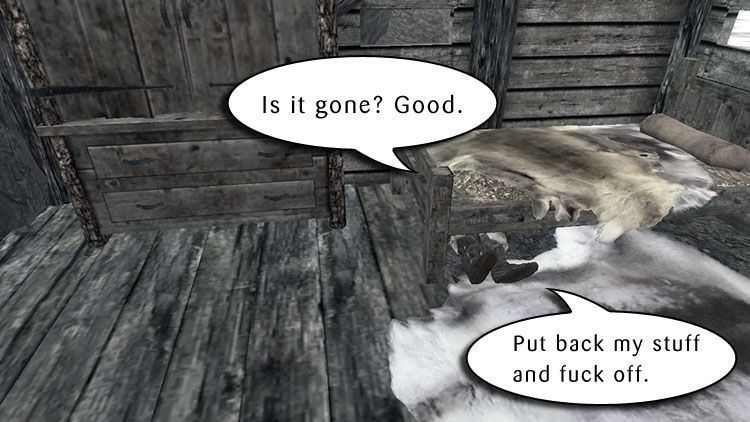 After high-tailing it with my brand new set of oven mitts, it didn’t take long before I stumbled on something that would shake my knowledge of this world to the very core.

For a while, I thought that I wouldn’t come across any of my prey this day. I’d wandered far east of Whiterun, where my journey had begun the night before. Before long, I would end up at Whitehold, apparently the Hold where imaginative names go to die. It was getting cold and the sun was setting. I’d almost given up hope. But then, in the distance, I heard something.

Loud thundering steps coming closer and closer. No smile appeared on my face as I knew dragons didn’t walk. I peered over the edge of the cliff I was walking along and saw a pair of giants. Bored to tears with them not being dragons, I sighed deeply. Then I heard it. The unmistakable sound of dragon’s wings, descending from some nearby mountaintop. 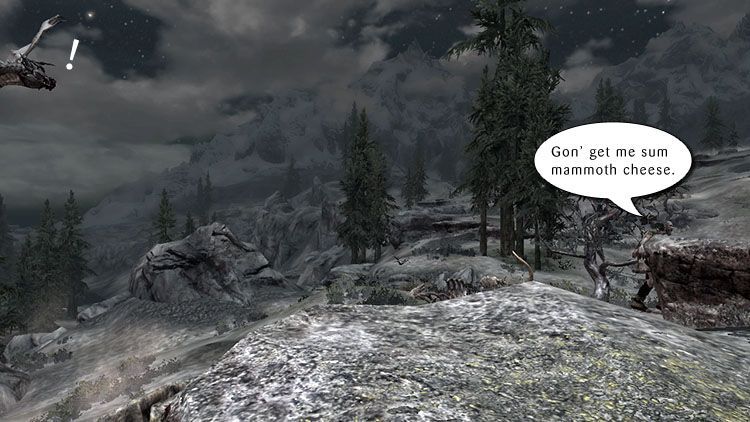 Maybe dragons are vegans. No, that’s not it. Maybe they wish they could be and just get really mad when someone else isn’t.

It must’ve heard the thundering steps as well because it wasn’t after me. I watched it swoop down from the sky behind the giants. It took its sweet time to line up its shot (breath). After a few minutes, the giants started to walk further away from each other. The dragon noticed that this was his chance. 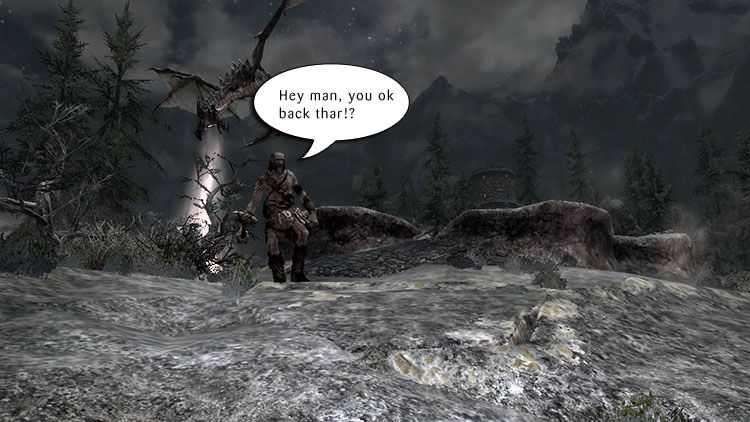 The dragon spewed some sort of icy shit down onto one of the giants. He seemed mildly perturbed by this and let out a grunt. After his companion was through scratching his arse and bothered to looked around, the fight was on! 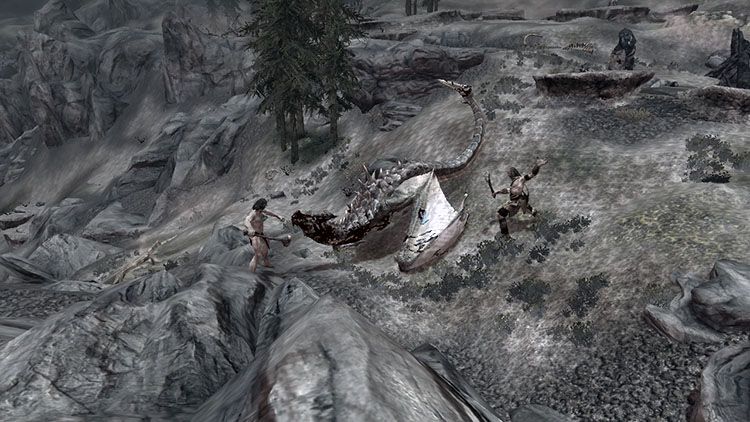 Correction: Dragons can walk, but only when they forget that IF THEY NEVER WALKED, THEY’D BE UNSTOPPABLE.

I found myself a nice spot on the cliff to watch the fight from. At first, I felt relieved that I didn’t have to fight the thing myself. They are quite ferocious after all, and my armour makes weird noises when it’s frozen. However, as the fight went on, I started to feel sort of left out. Suddenly, I heard something. There was a wolf down at the foot of the cliff!

With renewed vigour and magic iron legs, I jumped down and pulled my swords, eager for some killing. 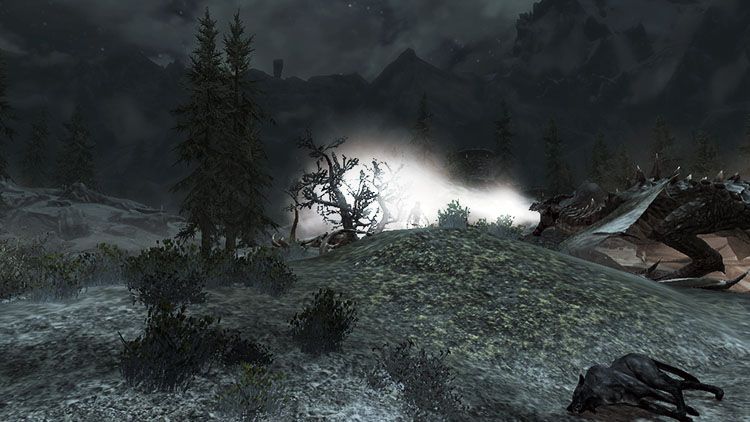 Size-wise, maybe less awesome, but all life is equal in the eyes of the Gods… Shut up.

The fight lasted all of eight seconds before the wolf lay dead in front of me. I sheathed my swords and sighed big time. Looking at the battle between the giants and the dragon, I started to think. And then it hit me. Right there, I realised the conspiracy! The dragons must’ve been summoned to deal with the much bigger problem of giants living 5 minutes from every major settlement. 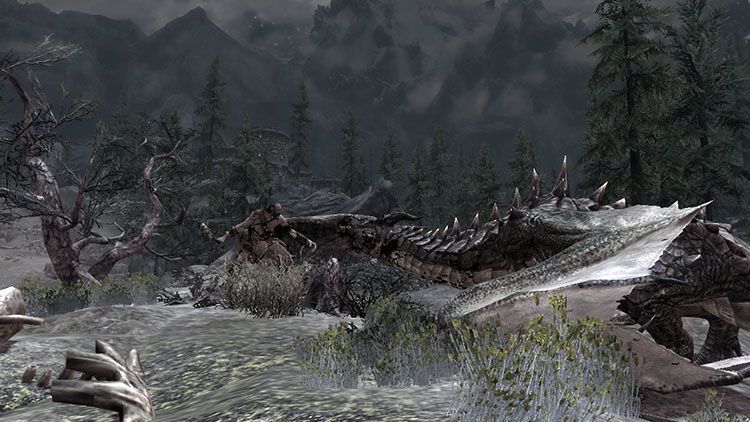 I tried grabbing some of those plants but they were no decent substitute for popcorn.

It was a poor idea, however, as the giants were making short work of the dragon. None of them were paying any attention to me; I was practically standing right under their noses looking on like the adoring fan from the last age (who, according to legend, died when an arena champion kicked him off a very high cliff). Things were about to get very dangerous, however, because once the dragon was dead, I suddenly became less invisible. 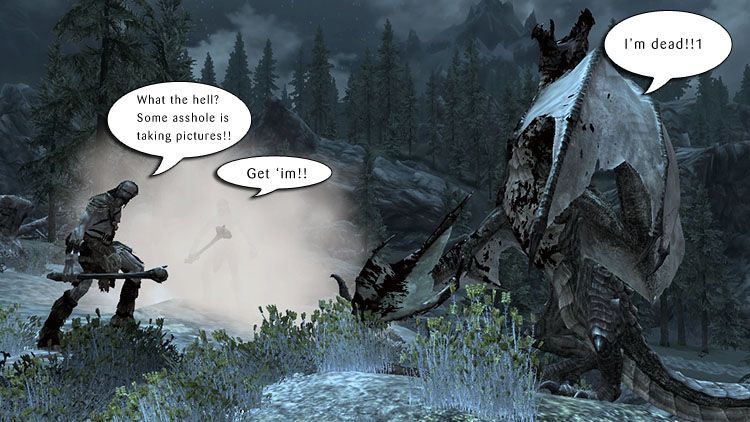 I tried telling them that it was a public place.

After high-tailing it a second time in one day, I was meandering aimlessly through the snows of Skyrim. The giants had given up chasing me long ago. Reluctantly, I’d thrown my new pair of oven mitts behind me in the hopes that they would each catch one and then argue over who gets the set. Had the wolves that were also chasing me not eaten the mitts, it would’ve worked brilliantly.

About ten miles, or two minutes, later I noticed a symbol on my compass that looked somewhat like a dragon. For a moment I thought that I would try again and this time kill the dragon myself but that thought was strongly assuaged by what I saw mere moments later. Another dragon, larger than the previous one, was taking on a couple of necromancers near a small lake. Watching the three go at each other, I felt like just passing by and go back to Whiterun to smith my 1100th iron dagger.

But then I figured, what the heck. Let’s show this dragon who’s boss! 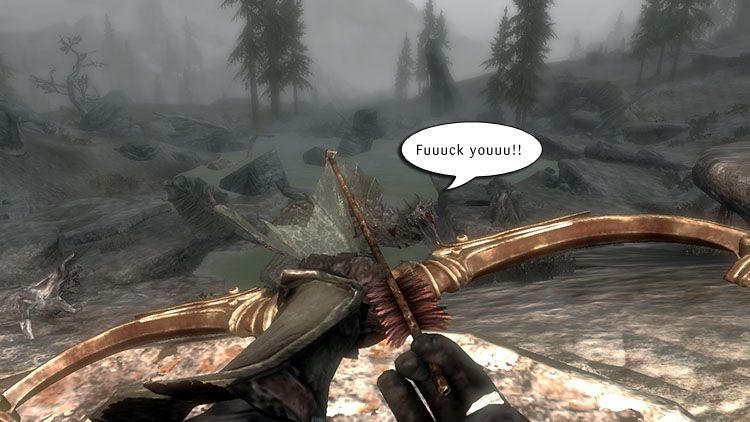 After shooting it in the face a couple of times with my bow, it started to spew fire at me. “Yes!” I thought to myself, “I’ve gotten its attention now!” Full of hearth and vigour, I pulled out my swords and charged down the hill towards it. 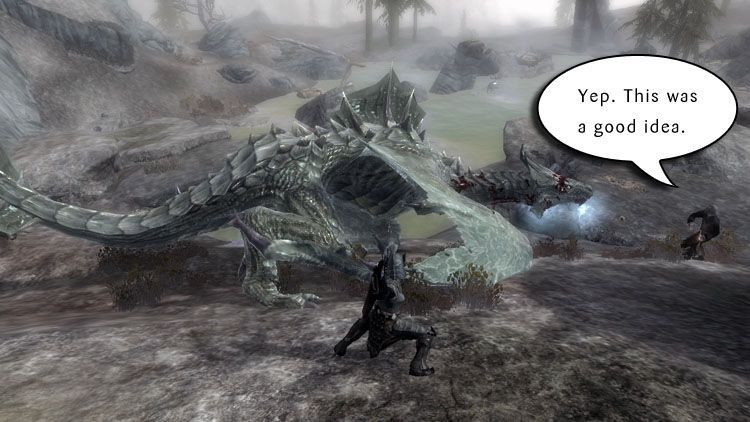 I was debating whether sticking it in the groin would have the desired effect.

The dragon was momentarily distracted as it finished off the last of the necromancers. I got in a few good strikes before it took to the skies again. For what felt like 10 minutes, we went at each other. I had the good fortune of being able to use healing magic and thus, there was no way it’d kill me with its fire. I was safe until it would start walking.

Which happened by the time we’d gotten to a mill some ways up the river. The whole time, I had the fire in my heart, thinking that “I’m going to kill this dragon and become a hero!”. Everyone would love and respect me, except perhaps the owner of the mill who was crying and pissing his pants while watching the dragon and me battle it out in what was left of this lumber yard.

I struck the final blow back at the lake. I waited until the moment was right, and then charged right out and struck it in the face. It howled and then rolled down the hill and into the water. 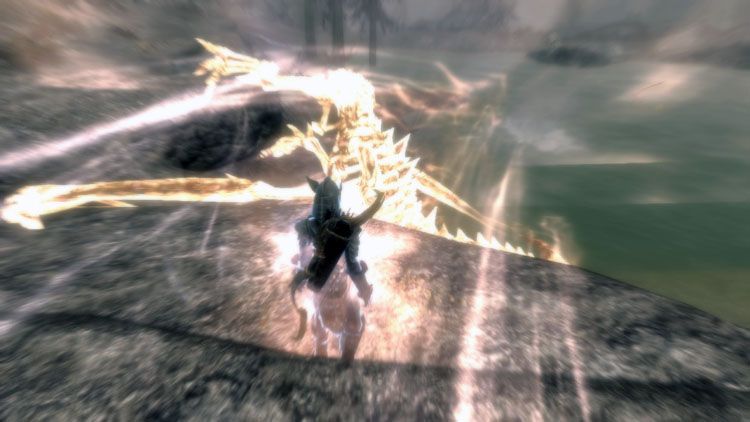 The power invigorated my being. Even as the battle died down, I could still hear the loud chanting somewhere off in the distance.