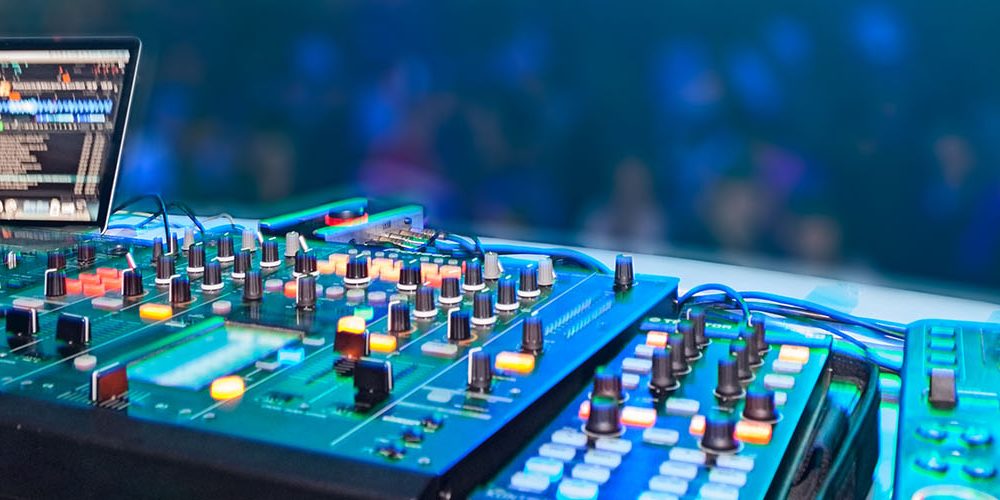 This is my way of structuring themes in music.

Over the years, I’ve come to look at most modern motifs (i.e. themes and melodies) using what I like to call “phrase patterns,” which I suppose you could call a system for how the modern theme is constructed on the horizontal axis and relative vertical axis.

Disclaimer: As far as I’m aware, there’s no commonly accepted music theory here, just my own speculation. Take it for what it’s worth.

If you haven’t read my take on musical form, now may be a good time to give it a quick read through.

Motifs are made up of a single part which is subdivided into four of what I call segments. For eight-measure parts, a segment is two measures long, and for sixteen-measure parts, it’s four measures per segment. These are then used on their own or combined to form phrases.

The way in which the segments are distributed across phrases is the phrase pattern. I write it using numbers and slashes, e.g. 1/1/2. Each number represents a phrase and the amount of segments it consists of. So, for the example 1/1/2, the theme is made up of three phrases, the first two of which are one segment long and the last is two segments long.

I’m going to illustrate this using Hedwig’s Theme by John Williams. (You may know it as the main theme to the Harry Potter films.)

This is the first part, with each phrase is marked by a slur. If we examine the lengths of each phrase, we can see the 1/1/2 phrase pattern mentioned above. Note how the melody repeats with echoes of the same rhythm.

This is the second part of Hedwig’s Theme, which follows the 2/2 phrase pattern. Note that there’s more energy in longer phrases — both in terms of the energy produced and the energy needed to sustain them — and that the second phrase is very similar to the third phrase of the previous part.

One more example, this time the seminal Nerevar Rising by Jeremy Soule. 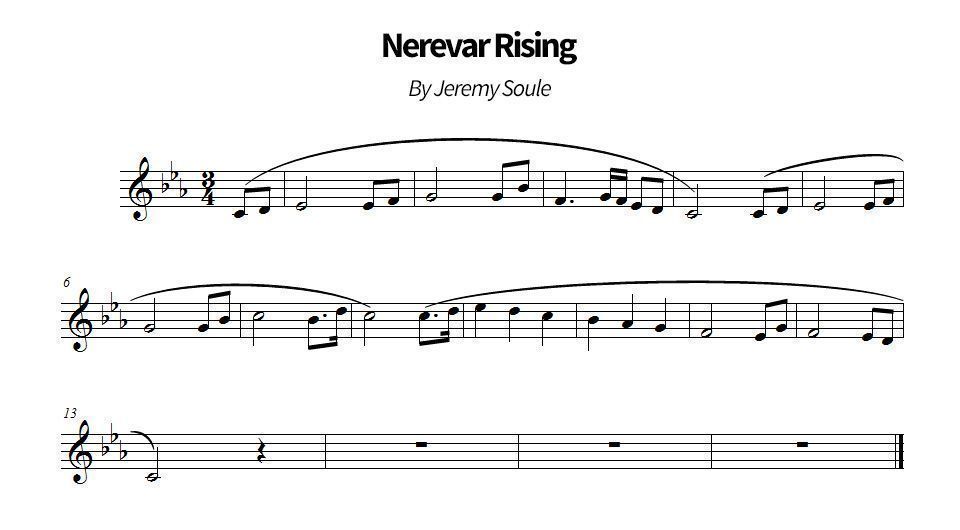 The distinction between the first two phrases is more obvious here, whereas the third phrase relies on the risen end of the previous, even though it’s still the same three notes. The third phrase is silent for over three measures at the end, which Soule uses to build up the next iteration.

To spot where phrases begin and end, the first thing to look for is a return to the starting point. This is not always accompanied by a return to the tonic, although that is often an indicator provided it falls on an odd measure (third, fifth etc.).

A return is most commonly identified by looking for a repeat of the rhythm of the very first measure of the part. In Hedwig’s Theme above, we can see clear repeats of both rhythm and melody throughout. In Nerevar Rising, every phrase starts exactly the same, only the third is one octave above.

In my post about musical form, I talked about how the ears hear everything in multiples of two. This also applies to segments, which means that a single-segment phrase on the motif-level doesn’t have the horizontal room to both build tension and release it. On their own, they can only do one of the two, or neither.

This means that motifs are bound to use two-segment phrases in order to establish and resolve tension.

Let’s look at Binary Sunset by John Williams as an example.

Our phrase pattern here is 1/1/2. The first phrase opens and starts on the same note, creating no tension, whereas the second rises one step higher and rests there on the Dorian subdominant, leaving us with just a small amount of tension. Then, on the first note of phrase three, the entire orchestra bashes out on the dominant, only to immediately release all that tension back into the tonic.

Resolving into that tonic creates a lot of anticipation which is then carried up in skips until dropping down by a third, a strong progression in and of itself. The motif ends by returning to the tonic and then slowly moving downwards in smaller, chromatic steps, symptomatic of the neo-romantic style Williams employed throughout the score.

Now, we have two measures per segment in this motif, and by examining the interplay between the phrases, we can easily see that the second is written as preparation for the third (not unlike in Nerevar Rising). But, imagine if the second phrase had a ritardando in it and we ended afterwards. It still works, even though it’s not a conclusive ending.

That E Major in the third phrase, however, carries so much tension with it that if we attempted to end the phrase or the entire piece there, it would be a really awkward and sudden stop. At that point, we’re in the middle of a phrase that needs another segment to resolve.

Longer, gradually rising climaxes are also possible inside two-segment phrases. There are few better examples of this than Professor Alexander Hartdegen from Time Machine.

Our first phrase starts conservatively, going back to the tonic in its latter half before ending on that Dorian Subdominant, here a D, just like Williams did in Binary Sunset. Then we start the next phrase on the submediant, F, a common tactic used to create tension even at the start of a phrase. (Soule did the same for the final climax of Nerevar Rising.) The move from F to D here is what I like to think of as the inverse downwards third. It functions similarly to a move from Am to G.

We get a downwards third right afterwards, going from F to Dm. We could’ve gone to G instead of Dm, however then the chord progression would’ve ended before the phrase. Instead, from Dm, we can go back up to F again and then get the standard F G Am cadence to end the phrase.

This example is more typical in that the climax falls on the first beat of the second segment in the latter phrase. Badelt uses the entire motif to build towards this point.

Pyroxene of the Heart

But it’s equally possible to have one climax in each phrase when using the 2/2 pattern. This is more common during very high drama choruses, such as the one in Motoi Sakuraba’s Pyroxene of the Heart.

Here we have two deceptive cadences (D to Em) used as climaxes, really hammering on those upwards stepwise movements. Going from the dominant also gets us that sought-after semitone step in two tones out of three between the Bm and C.

In 2/2, the final segment is often a repeat of the second. In other words, both phrases end similarly. In Hedwig’s Theme above (and in Maker of Worlds below), the repeated segment in the theme’s second part is from the end of the first part. In Kynareth’s Wish, the solution is almost exactly the same, except we have eight measures per phrase.

The curve between the two phrases here is very predictable; we begin on the fifth and rise just one step upwards, then on the fourth following the same pattern.

In the second phrase, we skip all the way to the mediant’s third scale degree, just like in Binary Sunset, then down and back up to one step below, just like we did in the first phrase. Then, we repeat the second half of the first phrase, albeit letting the cadence resolve on the tonic in both harmony and melody.

The theme’s second and third iterations employ a G/B in the fourth and twelfth measures (not counting the anacrusis), giving us a downwards circle progression (D G C).

Out of the examples we’ve covered, Hedwig’s Theme stands out as consisting of more than one part, and it shifts phrase pattern from 1/1/2 to 2/2. This offers more development than a single-part theme and is quite common in the verses of pop songs. 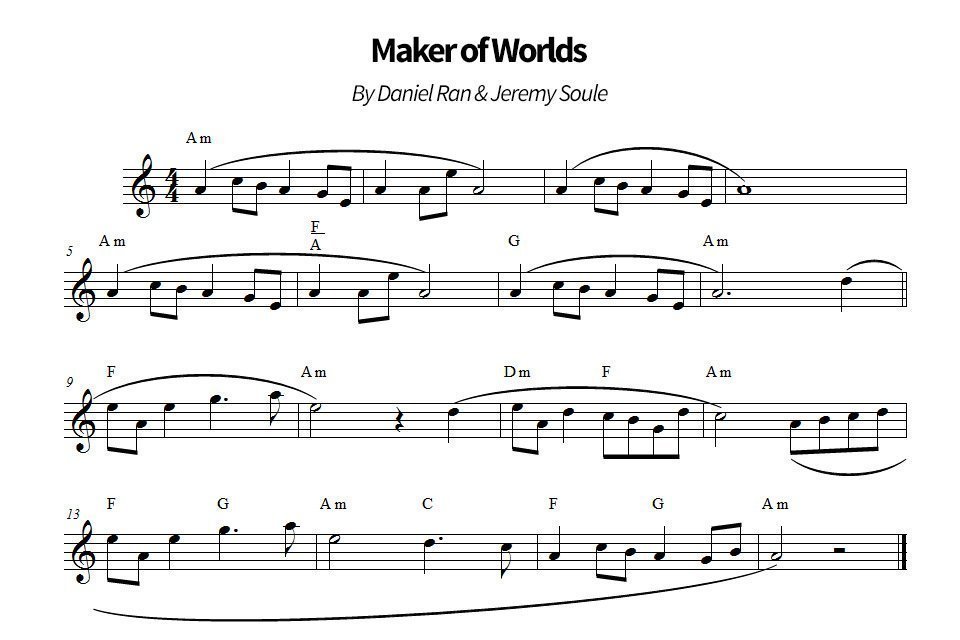 This is a track which is partially based on Jeremy Soule’s Auriel’s Ascension, hence the double credit. Soule’s theme here is an unusual example of one with the 1/1/1/1 phrase pattern; you can hear how it doesn’t really go anywhere. Each segment comes and goes without any development. The repetition is relieved only by making a significant shift in arrangement halfway through. (Dropping down an octave in the original, also changing to strings in my version.)

My contribution, the actual Maker of Worlds motif, if you will, is the latter half, starting in measure nine. It’s in Lydian instead of Aeolian, and its opening rhythmic shape is an inversion of the ending fifth skip in the Auriel’s Ascension theme. It’s in 1/1/2, returning to Soule’s theme towards the end. (However, when the motif is repeated at the end of Maker of Worlds, it doesn’t.)

Useful for themes consisting of melodic shapes (the best example of this is probably Jeremy Soule’s Far Horizons) or themes that do not progress in themselves, like Auriel’s Ascension.

The result is a steady theme in terms of drama and progression.

Arguably the default. Having one segment per the first two phrases gives us time to build up the energy needed for the third. However, we naturally have three iterations of our opening pattern, although this can be assuaged in some cases by making minor modifications to it, or by changing the underlying harmony.

In this pattern, the second phrase usually goes higher or lower than the first in its latter half. and the third phrase almost always reaches higher. Here, we have to make sure that the second segment of the third phrase is a actually a continuation of the first, otherwise we may be unwittingly in the 1/1/1/1 pattern, just with a weak melody.

The third phrase doesn’t have to be particularly similar to the first two. Theme of Village from Lufia II, for instance, starts its third phrase in a very different way. This is also another example of a piece that goes from 1/1/2 to 2/2.

This pattern trades repetition for more potential progression, since we have more space to work with. It usually appears following a part in 1/1/2 but can exist on its own.

I find that the result is more lyrical, towards a more classical style of singing. The entirety of Reflection from Mulan is in 2/2, with the second phrase bearing little resemblance, if any, to the first.

2/2 seems more suitable to themes that repeat their initial pattern once or not at all, or those that are longer with more changes in direction.

I’m calling this speculation rather than theory because it’s entirely my own machination. It seems applicable more often not, but as a guide rather than a set of rules.